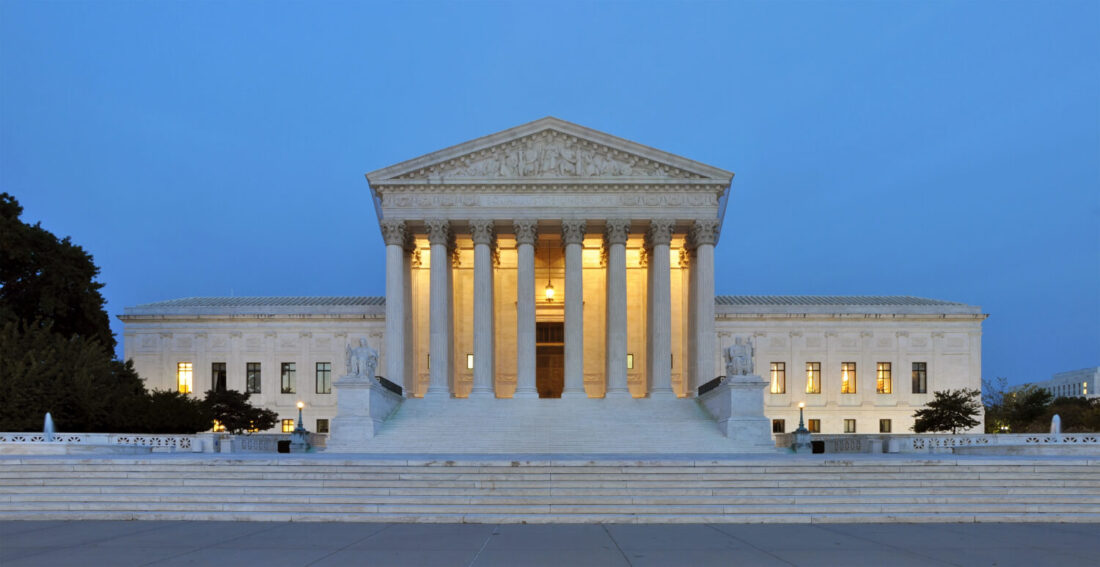 On Thursday, Jan 13, 2022, the Supreme Court of the United States moved to stay the Biden Administration’s proposed COVID-19 vaccine mandate on companies with 100 or more employees. Conversely, it allowed a similar vaccination mandate on the healthcare industry to proceed. This week, we’ll explore the differing decisions and the implications they will have moving forward.

It should be noted that neither of these decisions stand as a final ruling on the much-debated constitutionality of vaccine mandates. Rather, the question in both cases was whether or not the mandates could go into effect while challenges moved their way through the lower courts. As such, it may be helpful to again begin by reviewing how we got to this point.

On December 17, the U.S. Sixth Circuit Court of Appeals, in a 2-to-1 ruling, reinstated the OSHA ETS requiring employers with 100 or more employees to ensure their employees are fully vaccinated by January 4 or allow employees to submit weekly negative test results.

With the implementation deadline bearing down on employers, the NFIB and others petitioned the U.S. Supreme Court to reinstate the stay until the original question of constitutionality could be determined. Thursday’s Supreme Court decision placed the stay back into effect and, in doing so, gave tremendous insight as to where the Court stands on the matter of the OSHA mandate’s constitutionality.

The Court, in a 6-3 decision, ruled that those challenging the ETS are likely to succeed based on the merits of their claim that President Biden’s administration overstepped its constitutional authority by directing a federal agency (OSHA) to act outside the powers they are given by Congress. This ruling, similar to last year’s decision to lift the federal eviction moratorium, is indicative of the Supreme Court majority’s skepticism of federal regulatory power exercised without specific – or explicit – congressional approval.

The court’s three liberal justices (Breyer, Sotomayor, Kagan) disagreed. They compared the COVID-19 mandate to the already existing fire or sanitation regulations imposed by OSHA, arguing the grave harms resulting from COVID-19 exposure are exactly those OSHA was created to prevent. According to the conservative majority, however, “[a] vaccine mandate is strikingly unlike the workplace regulations that OSHA has typically imposed” because it “cannot be undone at the end of the workday.” They went on to call it a “significant encroachment into the lives – and health – of a vast number of employees.”

Had it been upheld, the rule would have applied to an estimated 84 million workers across the country.

In an interesting turn of events, conservatives Chief Justice John Roberts and Justice Brett Kavanaugh then joined the three liberals to form a 5-4 majority and allow the vaccine mandate on employees of healthcare providers who receive funds from Medicare or Medicaid to move forward. This requirement, often referred to as the CMS (Centers for Medicare and Medicaid Services) mandate, does not include a testing alternative – meaning healthcare workers will lose their jobs if they do not move forward with immunization.

This time, the majority found the Department of Health and Human Services (DHHS) acted within the delegated authority it was given by Congress to promulgate health and safety regulations – like vaccine mandates – in order to prevent the transmission of “communicable diseases and infections” between patients and healthcare workers. As a result, the CMS mandate for healthcare workers can be enforced and implemented while the matter of constitutionality is adjudicated in the lower courts. While I personally fear this may further exacerbate the staffing crisis already impacting our hospitals and other healthcare settings, the CMS mandate was always on stronger legal ground than the OSHA rule.

Regardless, the Court’s decision to stay the OSHA mandate is a tremendous victory for business associations like our chamber and the millions of private companies and employees we collectively represent.

“Today’s decision is welcome relief for America’s small businesses, who are still trying to get their business back on track since the beginning of the pandemic,” said Karen Harned, Executive Director of NFIB’s Small Business Legal Center. “As small businesses try to recover after almost two years of significant business disruptions, the last thing they need is a mandate that would cause more business challenges… We are optimistic that the courts will ultimately agree with us that OSHA does not have the emergency authority to regulate the entire American workforce.”

The fight, however, is far from over. Not only do we still need finality on the constitutionality of both federal mandates, the Court was noticeably silent on the ability of state or local governments to promulgate vaccination regulations and mandates – leaving the door open for future legal battles down the road. Given this reality, we will continue to actively engage on the issue through our involvement with the statewide Listen to MI Business Coalition.

As I’ve said before, businesses have been on the frontlines since the start of the COVID-19 pandemic, working to stay afloat while keeping their employees and customers safe. They’ve been strong proponents of increasing vaccinations as a sensible goal and of reducing spread in the workplace. As a result of their efforts, they are not a significant source of COVID-19 outbreaks and never have been. They should be applauded for this fact, not penalized with more intrusive government mandates. We’ll continue to make that argument, no matter how long it takes.